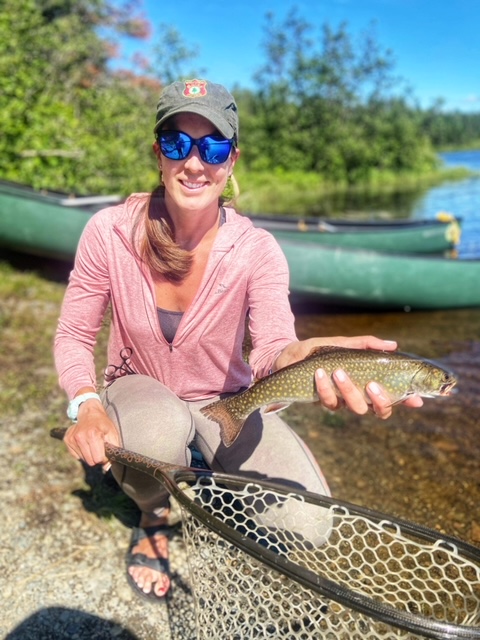 My mom, Carlene Holmes, is not super outdoorsy. She enjoys watching deer, gardening and walking the flat, railroad bed-turned-path in Machias.

She is adventurous, though, so I guess it shouldn’t have surprised me as much as it did when she said she wanted to canoe the Allagash in remote northern Maine with me.

I had two thoughts: First, the sooner, the better, because she’s 74 years old. And second, I did not want to be responsible for her, since I had never done the trip myself, and she’s taking coumadin (a blood thinner).

We decided to go at the end of June with Dave Conley of Canoe the Wild. Dave is a full-time canoe guide who does multiple trips down the Allagash each summer. In addition to his expertise, he provides canoes, dry bags, tenting gear, kitchen items, transportation and does the cooking. 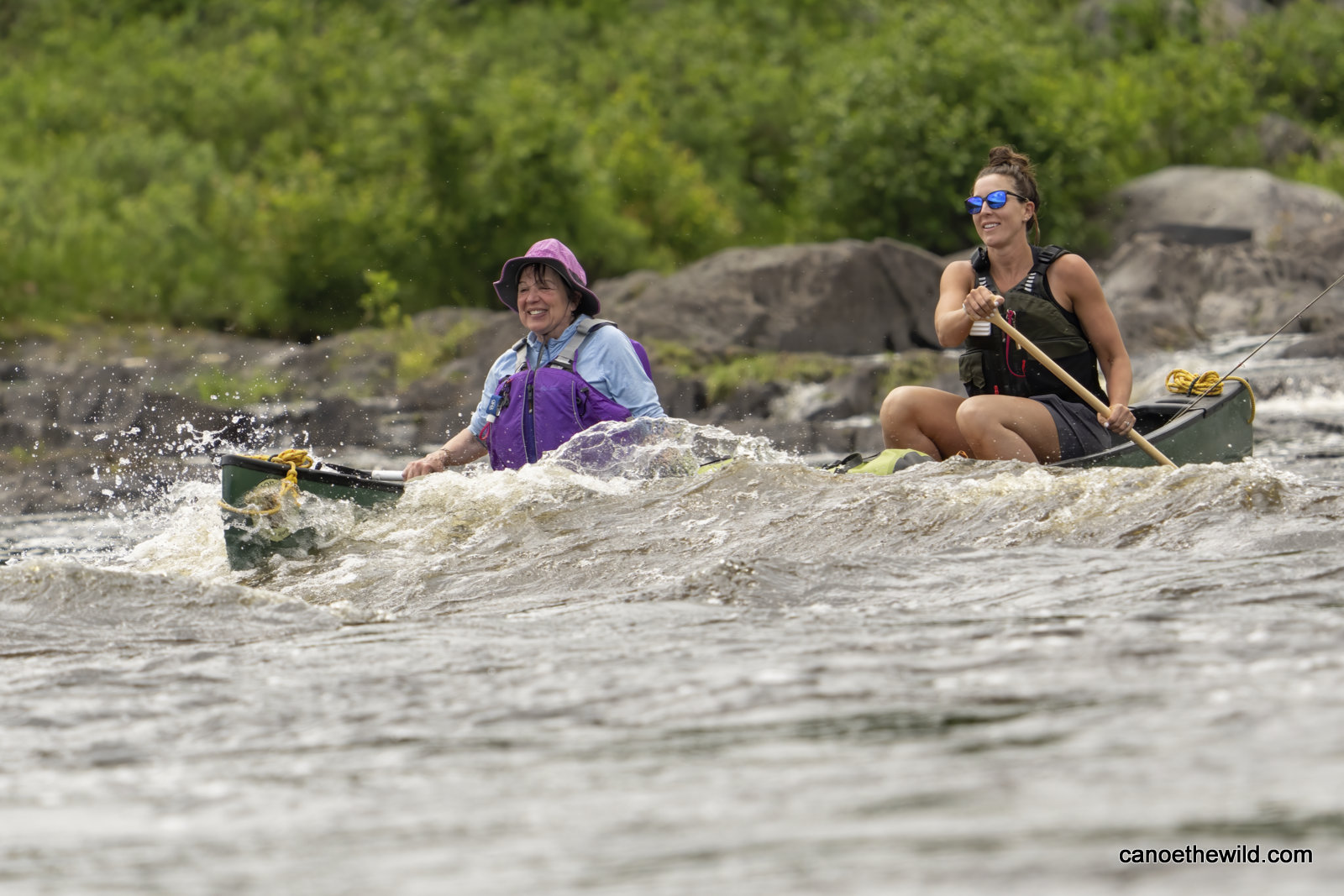 Day 1, 1.5 miles: It was cold and rainy when my mom and I met our guides Dave, Tammi and the other clients in Ashland. The 12 of us crammed into a van and bumped along logging roads for two-and-a-half hours until we arrived at Churchill Dam. Our original plan was to start at Indian Pond, but the forecast called for a strong headwind for two days, days we would be paddling across large lakes and vulnerable to the wind. So, Dave opted to start at Churchill Dam instead and skip the lakes.

When we arrived at Churchill Dam, we toured the museum and learned about the logging operations that took place in the Watershed more than a century ago. Dave went over paddling strokes, strategy and safety. Cross draw, pry and draw to the hip strokes allowed partners to quickly maneuver their canoe left and right, without having to switch hands, critical for canoeing whitewater. We would paddle the river’s most serious rapids, Chase Rapids, the following day. In the rain, we loaded our canoes and paddled 1 1/2 miles to Jaws campsite on Churchill Lake. We threw up tarps, gathered wood, set up tents and tried to stay warm. At least there were no bugs! 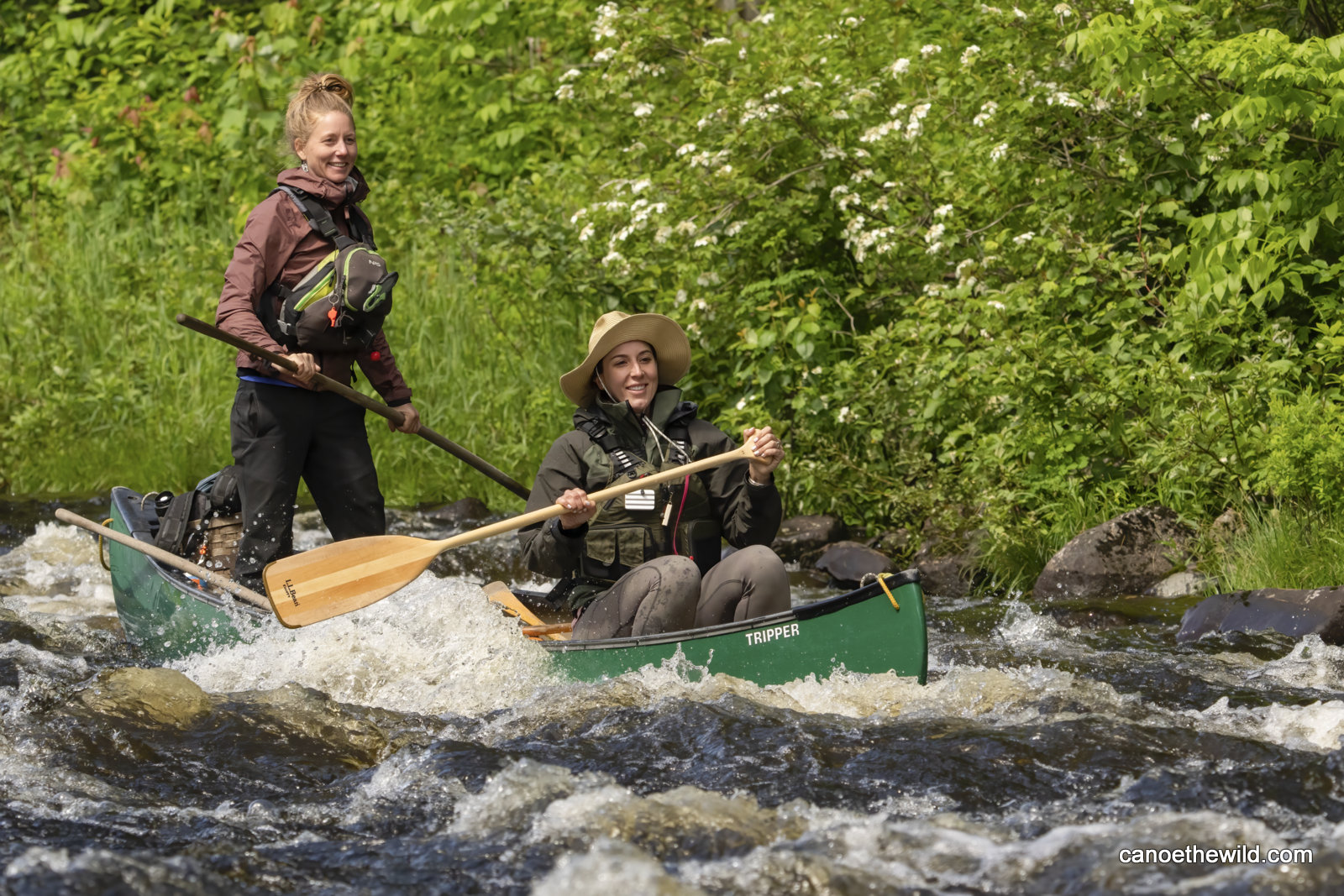 Day 2, 9.5 miles: After a breakfast of oatmeal, we paddled back to Churchill Dam and portaged canoes and gear to the other side. A ranger named Nolan took our gear and my mom down to the site of washed out Bissonette Bridge a few miles downstream. With zero canoe experience, we decided canoeing whitewater on the first full day together might be too much for her. The rapids were thrilling. I paddled in the bow of Tammi’s boat, while Tammi poled and gave me instructions. No one in our group flipped, though we did speak to some kayakers who flipped one boat and broke another.

After the rapids we loaded our gear and my mom and I continued down river. As the river widened before Umsaskis Lake, we fought a strong head wind. We decided to camp at Chisholm Brook and wake up early the next day to cross the lake. After setting up camp, I announced I was going to take a few casts. Gus, a 10-year-old in our group enthusiastically volunteered to net any fish I caught.

He netted chub and chub until we looked in the net with surprise to see a healthy 12-inch native brook trout! Gus and I were both very excited and we decided to keep it for dinner to share with the group. In addition to tiny bites of brook trout, we enjoyed filet mignon for dinner with gingerbread for dessert. As soon as the sun set, mosquitoes and black flies swarmed and we ran for our tents. At midnight, my mom, who had woken up to pee, whispered, “Christi, come see the stars.” As tired as I was, I unzipped my sleeping bag, crawled out of our tent and looked up. The sky was dark, with no moon, and the Milky Way glowed a strong haze. It was stunning. 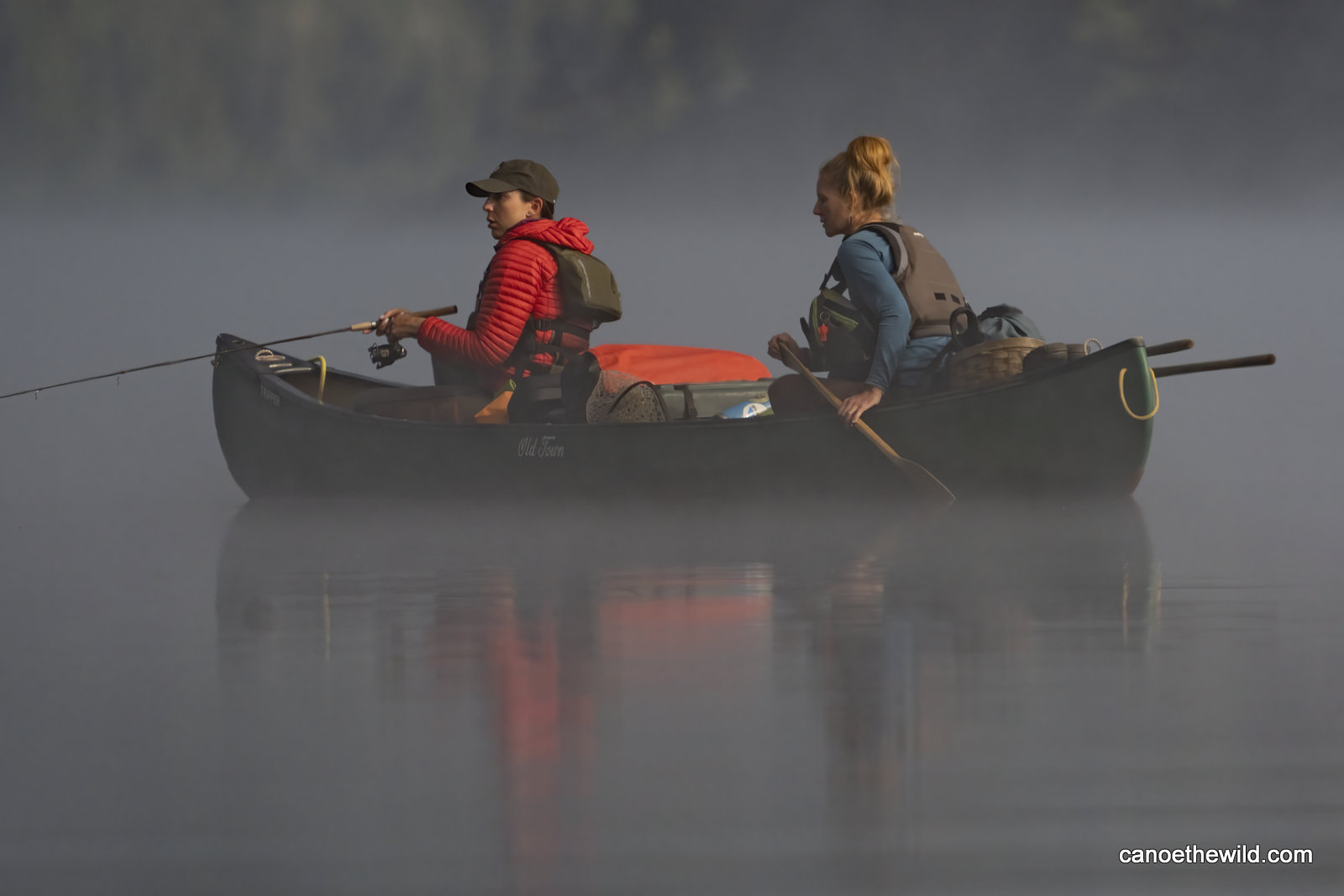 Day 3, 12.5 miles: As planned, we woke up at 5 a.m. to get an early start across Umsaskis Lake. Fog hung low and thick and I kept my eyes and ears peeled for moose. In the fog, the cry of a loon eerily echoed unlike any loon I had ever heard. By mid-morning the sun had burned off the fog and the day quickly turned hot. The wind was with us and blew us down Long Lake.

The remnants of Long Lake Dam posed a hazard at Harvey Pond’s outlet. Nails and spikes protruded, and could damage a canoe, or worse, a capsized canoeist. Dave demonstrated how to line our canoes along the water’s edge instead of portaging. We all got out and sent our canoes over the old dam still full of gear. That afternoon we made camp at Cunliffe Island and since it was hot and sunny, most of us went swimming. 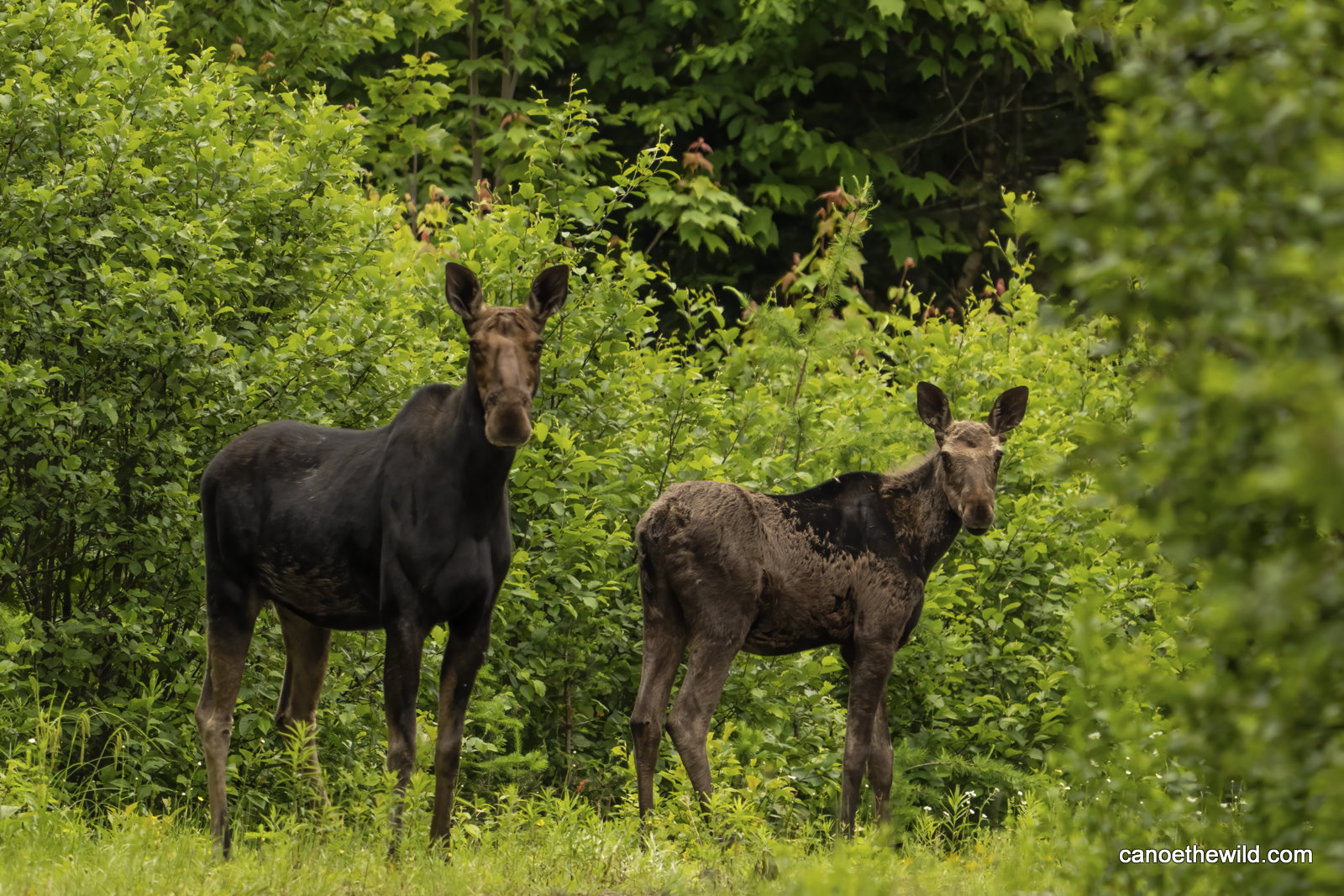 Day 4, 25 miles: The wind was with us again so we moved quickly downstream. A beautiful, lone elm welcomed us to Round Pond, where we paddled past a nesting loon and back into the river. At one point, Tammi announced, “this is a good fishing spot,” so we stopped and fished. A half a dozen small 7- to 9-inch brookies were quickly gathered for dinner. 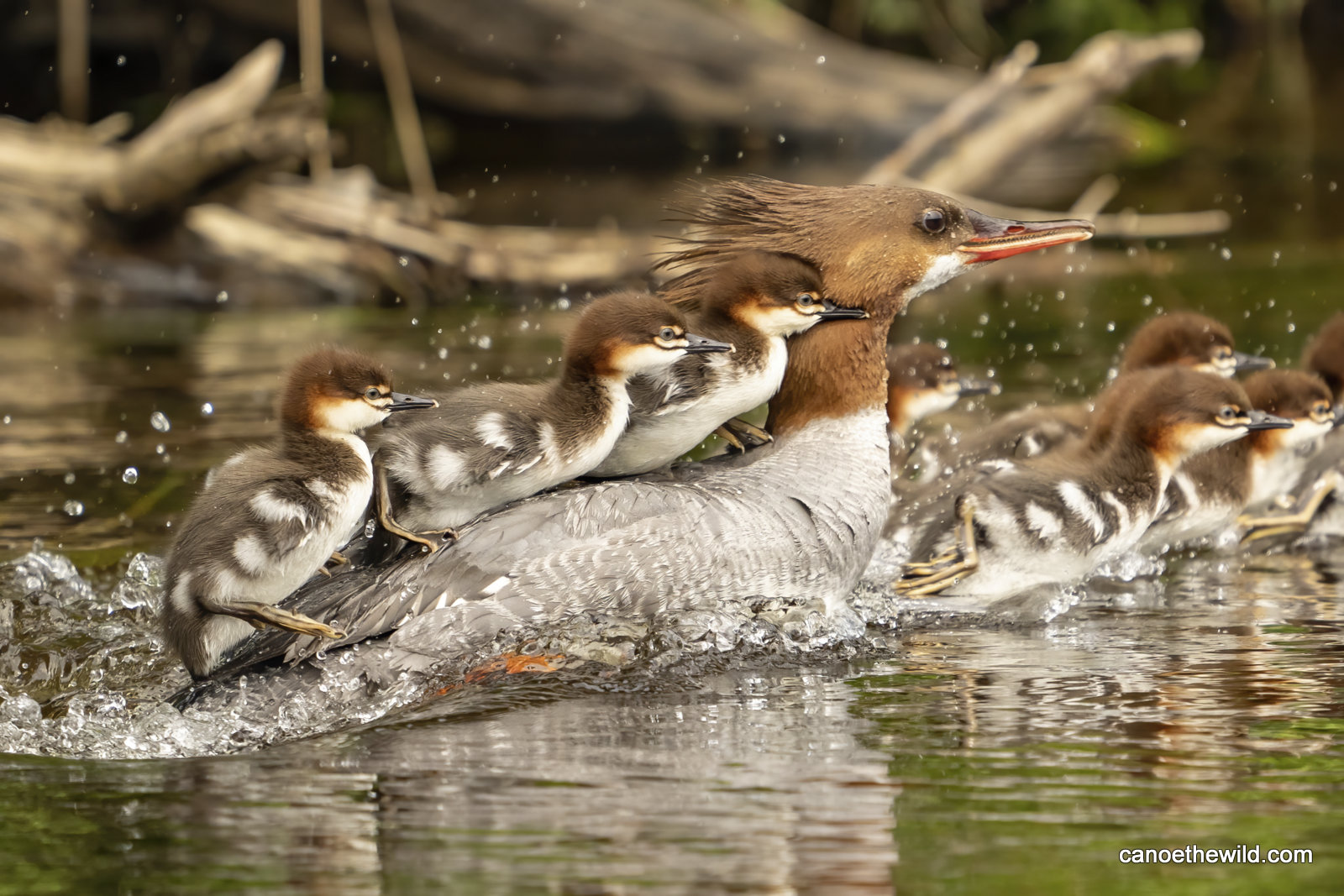 Our campsite that evening was Cunliffe Depot, high on a cliff, with a nice breeze that kept the bugs at bay. Gus and his older brother Elliott found a mayfly, and I told him that meant the fishing would be good. Gus enthusiastically grabbed my net. After catching and releasing a few small brookies, I gave a quick fly-fishing lesson to a few people in our group and one of them took to it quickly and caught two brookies!

Day 5, 9 miles: We enjoyed the previous day’s brook trout, alongside blueberry pancakes, for breakfast. Before we left Cunliffe Depot, we hiked to two abandoned Lombard log haulers, one steam and one gas. It was hard to image that only a century ago, men and horses lived here and worked a logging operation. Nearby, we visited the grave of a logger, Joe McKeel, who died in 1870.

The water was high, 2,200 cubic feet per second, so it was an easy paddle down to Michaud Farm where we signed in at the ranger station. A normal flow was around 500 cfs. After Michaud Farm, Dave led us to an unmarked, unremarkable stream bank where he revealed, after a short walk, a reconstructed cabin where the Henry Taylor Sporting Camps stood in the mid 1900s. An abandoned car was parked nearby, trees grown in thick around it.

Downstream, a large sign announced “Danger: 40’ Falls Portage Right” and we began the tedious process of portaging one-third of a mile around Allagash Falls. With chores complete, we relaxed, had lunch, took photos of the beautiful falls and went swimming. Our last night on the river we stayed at Big Brook South, ate s’mores and played a cribbage tournament! 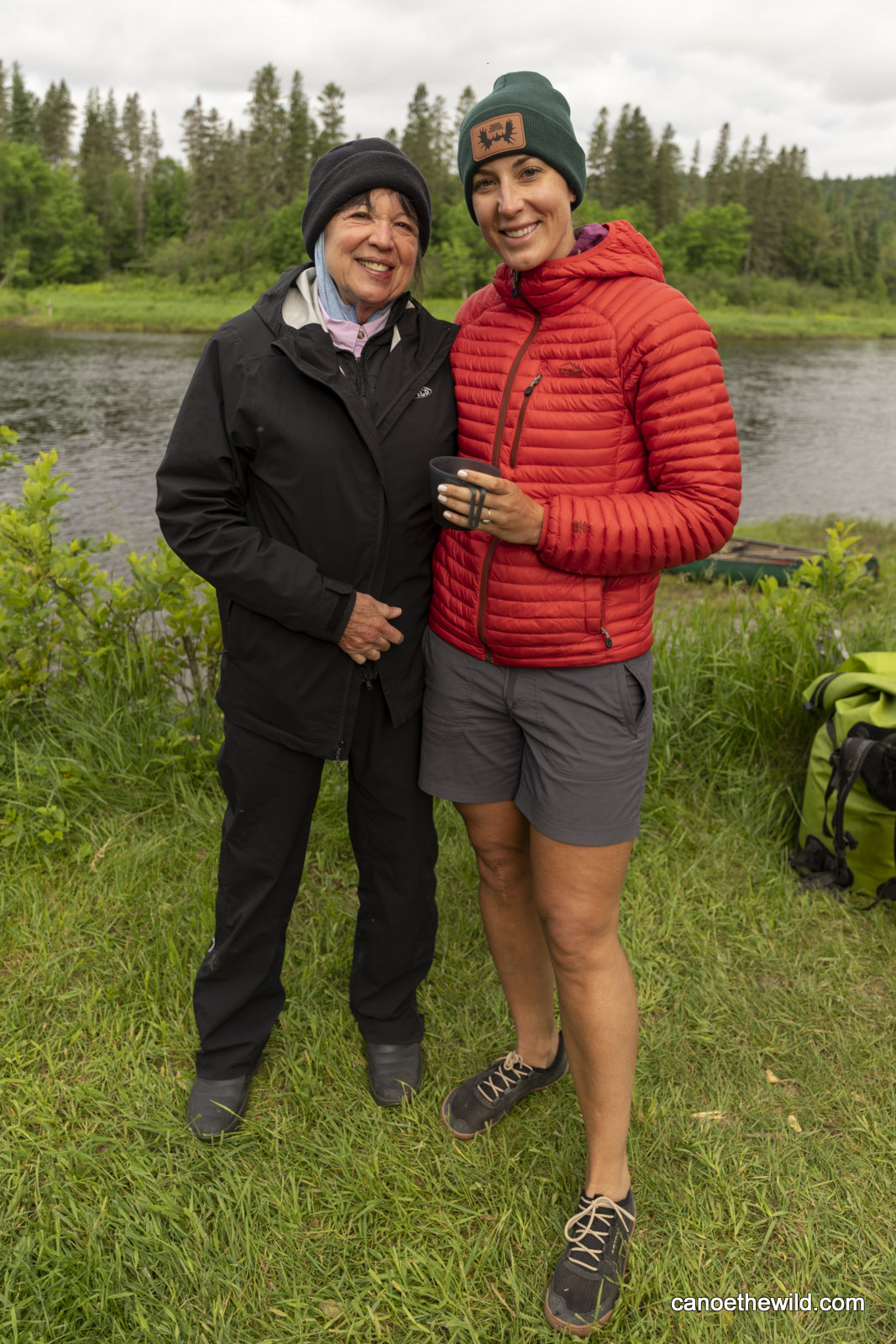 Day 6, 11 miles: By our last morning we moved efficiently as a team washing breakfast dishes, packing gear and paddling with great form. After stopping to fill water bottles at a cool spring, we paddled quickly out of the Waterway and into Allagash Village. We had done it. Six days and nearly 70 miles on the Allagash!

Click here for our 2022 schedule with open spots. Trip mid to late August and September tent to be all adults